Temporary Airport Hours due to COVID-19

Although village facilities are reopened to the public, the village strongly encourages the public to use established “no-contact” methods of conducting business such as paying monthly airport hangar and tie down rent online through WebPay. If online methods are not possible, in-person business for the Transportation Department will be conducted via appointment only. Please contact the Airport Manager, Erik Trydal, at 847-923-3778 in advance of arriving to arrange an appointment for service.

Schaumburg Regional Airport is owned by the Village of Schaumburg and is a public use general aviation airport encompassing 117 acres in both Cook County and DuPage County. Located at 905 W. Irving Park Road, it is easily accessible from I-290 via the Elgin-O'Hare Expressway. The airport is home to approximately 90 aircraft and handles about 35,000 operations per year.

The airport generates a total economic impact to the region of over $18.9 million annually through the numerous businesses which include an award-winning restaurant, aircraft charters, flight training, airplane and helicopter rides, aircraft maintenance and local news helicopters.

A Fun Place for All To Enjoy

Aviation can be categorized into three primary categories and the Schaumburg Regional Airport operates as a General Aviation airport.

Business Use of General Aviation Airplanes

General Aviation airplanes are used by many people for business or non-business purposes. Contractors, attorneys, doctors, consultants, salespeople, and many small business owners use light general aviation aircraft to fly to meet clients, inspect their businesses, or deliver packages and cargo in less than 1/3 the time it may take to drive. Often their destination may be more than an hour away from an airport served by the airlines, but only minutes away from a general aviation airport. There are more than 5,000 airports in the United States, but less than 500 have commercial airline service. Besides transportation, general aviation is often used to get an aerial perspective to view potential and development, inspect power lines and conduct wildlife surveys and other environmental inspections.

General Aviation as an Industry

Pilots who fly for the military, airlines, and personal use all have one thing in common. They all got their start learning to fly in general aviation airplanes at flight schools at places like Schaumburg. Air Ambulance services save lives by transporting patients, transplant organs, blood supplies, and other lifesaving elements. Aircraft maintenance, news gathering, law enforcement, electric line inspections, package delivery, and aircraft charters are just a few of the numerous aviation businesses that use Schaumburg Regional Airport, and all of which benefit the community as a whole, either directly or indirectly.

Numerous not-for-profit organizations use the Schaumburg airport, offering services to the entire community. Private pilots provide free transportation to people needing medical treatment through organizations like Angel Flight. The Civil Air Patrol educates kids, and other lifesaving flying activities such as search and rescue missions, disaster relief and aid to law enforcement. The Experimental Aircraft Association provides free introductory flights and aviation education to kids and the Ninety Nines promote women in aviation. Not-for-profit organizations use general aviation to track bird and animal migrations, weather patterns, survey wetlands, and variety of other services to study and protect the environment. Hundreds of organizations pass through or are based at the Schaumburg Regional Airport.

The Schaumburg Regional Airport estimates over 60% of the flights in and out of the airport are for business. It is estimated nationally that 65% of general aviation flights are conducted from business and public services that need transportation more flexible than the airlines can offer.

The Northwest Flyers, FBO at the Schaumburg Regional Airport works with AeroCare for air ambulance and organ procurement flights on demand.

US Helicopters provides helicopter service to CBS, ABC, NBC, WGN, and FOX daily to bring thousands of commuters up to date information for their daily commute.

The Civil Air Patrol, Woodfield Composite Squadron has been in operation since 1992 and is based out of the Schaumburg Regional Airport. The Civil Air Patrol, the official Air Force Auxiliary, is a nonprofit organization performing more than 95% of inland search and rescue missions in the continental U.S. as tasked by the Air Force Rescue Coordination Center.
Airport History 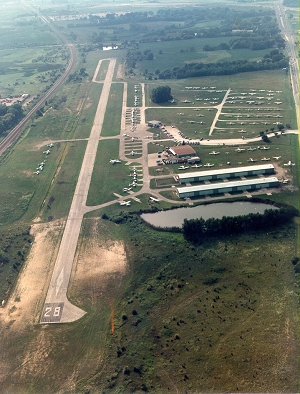 According to village records, the Schaumburg Regional Airport was officially built in 1959 and originally named Roselle Field. While 1959 was the official date the airport was built, this is not the earliest date that aviation activity has been traced in Schaumburg. Navy photographs show the area that appears to be around Schaumburg and Barrington Roads as being listed as an OLF (Optional Landing Field) for the pilots training at the Glenview Naval Air Station back in 1943. In one photograph, a light, high-wing aircraft can be seen in the grass.

The earliest map depicting Roselle Field was the December 10, 1964, Chicago Sectional Chart. According to the Illinois Airport Directory, Richard Leach was the manager and Beechcraft sales/service was on the field. Roselle Field was annexed into the Village of Schaumburg. The runway was 2,500 feet long and 50 feet wide. In 1965 the runway was extended to 3,100 feet. On February 6, 1970, President Richard M. Nixon flew to Roselle Field to dedicate a water treatment plant at the corner of Barrington and Irving Park Road in neighboring Hanover Park. In the early 1970s, the name was changed to Schaumburg Airpark. The Fixed Base Operator (FBO) changed to Northwest Flyers in 1985, who continues to operate as the FBO today.

Approximately 255 public use airports were abandoned from 1995 to 2001 jeopardizing the $150 billion economic boost the general aviation industry provides for the U.S. economy each year. In 1994 when the Schaumburg Airport was put up for sale, the FAA approached the Village and suggested that they consider preserving the airport and its benefit to the aviation community and the economy.

The choice the Village was presented with was to allow 117 acres of land to become another housing development or industrial park or partner with the federal and state governments to preserve open space and save one of the few remaining general aviation airports in the region. As you would do with your finances – the village diversified its investments and purchase the airport.

The Village of Schaumburg purchased the airport in 1994 to prevent it from being sold to developers. The purchase price for the airport was subsidized significantly by both the State and Federal Governments with the local share for many of the grants being as low as five percent. The current operations of the airport are covered solely by revenues generated at the airport and no general fund revenues are used for airport purposes.

New hangars consisting of 32 units were completed between 2000 to 2001 and the installation of the PAPI. PAPI (Precision Approach Path Indicator) is a system of lights that provide pilots vertical guidance to the runway. This assists the pilot in determining whether they are too high, too low or right on the glide path.